Bangalore Film Society and National Gallery of Modern Arts (NGMA) are hosting a preview screening of Papilio Buddha. It is our pleasure to invite all NECAB Matinee members for the same. Details of the screening:

Agenda :  Screening of Papilio Buddha followed by a discussion with the team behind. 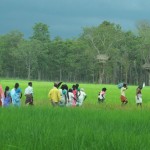 In a pristine village in the Western Ghats of India, a group of landless people squatted in the government land where they face opposition from the local entrenched political entities and upper caste landlords. These people known as “dalits”, who had been facing discrimination, displacement and physical oppression for centuries embrace Buddhism as a new form of cultural and religious identity, squat the government land and claim ownership.

Papilio Buddha tells their story through the experiences of Shankaran, a dalit youth who though has received higher education, is indifferent to the plight of his people and does not participate in the struggles of his father, Kariyan, who was a valiant communist but now feels betrayed by the movement. A close friend Manju, a brave activist who runs a pre-school at the squatted land, and drives an auto-rickshaw taxi which is a male profession and is harassed for that audacity, which leads to a fight with the male drivers when she slaps a powerful local union leader.

Lazy Sankaran mainly surrounds himself with the media people and NGO workers from outside, who are there as observers of the struggles of squatters. He comes into contact with Jack an American lepidopterist who travels the region in pursuit of “ Papilio Buddha” a rare and exotic variety of butterflies found only in this richly bio-diverse region. He assists Jack in collecting them which is illegal and is caught by local police. Jacks escapes punishment being an American white, but Shankaran is arrested as a domestic terrorist and severely tortured.

He is comforted by Manju, with whom he develops a relation and is slowly awakened to the tragedies of his people, their sufferings and agonies. He joins Manju in rising up against injustices and indignities. Manju, following the earlier altercation with the union leader is brutally beaten, gang- raped and paraded naked in the streets of the town.

A riot erupts which is viciously suppressed by the local police. The state government intervenes to evict the squatters from their land with the assistance of all the political parties including Gandhian peaceniks. A stand off with the power structure ensues which the Dalits can not win and they are driven out. In an event reminiscent of “Trail of Tears”, the defeated, beaten and demoralized Dalits are forced to flee their dear habitat which has sustained them for centuries with its rich ecosystem of rainforests…

To break a butterfly on a wheel – K Satchidanandan in Tehelka

Between Gandhi and Cultural crap – J Devika in Kafila

Whom does Buddha and Butterflies scare – Uday Kiran in Nalamidam

Banned – Aug 2012 – CBFC denied certification mainly because of the politics discussed in the film.

Kerala Police in Dec 2012 – Blocked a pvt screening of the film during IFFK without giving any reason.

The journey so far:

Official Selection to British Film Institute’s 27th London LGFF 2013. The only Indian film among the 60+ selections.

Jayan K Cherian is a New York based, India born film maker, graduated with honors from Hunter College, BA in Film and Creative Writing and MFA from The City College of New York in Writing, Direction, and Cinematography. Pappilio Buddha (2012) is his debut feature film and he made several experimental documentaries and narrative shorts such as: Shape of the Shapeless (2010) Love in the Time of Foreclosure (2009), Hidden Things (2009), Soul of Solomon (2008), Capturing the Signs of God (2008), Holy Mass (2007), Tree of Life (2007), Simulacra the Reality of the Unreal (2007), The Inner Silence of the Tumult (2007), Hid-entity (2007), and Tandava the Dance of Dissolution (2006).

Prakash Bare is a theater and indie film enthusiast focusing on acting and production of quality media content of social and global relevance targeting audience around the world. His film projects, produced under the banner Silicon Meia and honoured with 9 Kerala state film awards, are:

Sufi Paranja Katha (What the Sufi said, 2010), a period film which showcases the native culture of religious tolerance.

Ivan Megharoopan(2011), based on the life and works of popular Malayalam poet P

Antony P Thekkek better known by his pen name Thampi Antony, is a Poet, actor, and producer. He has played a variety of roles, most notably as a character actor in several Malayalam, English movies. Thampi, also the owner and CEO of several health care facilities in Northern California, produced several malayalm movies under his banner Kayal films.

MJ Radhakrishnan is one of the most acclaimed cinematographers in Indian Cinema. His films have been screened at several prominent film festivals around the world including Cannes, Toronto, Chicago, Rhode Island and Rotterdam. One of his works, Marana Simhasanam (English: Throne of Death French: Le Trone de la mort), won CamÃ©ra d’Or (Golden Camera Award) in the Un Certain Regard section at the 1999 Cannes Film Festival. He also won an award at the 2008 South Asian International Film Festival, London for the film Bioscope. He has also won numerous awards within India including five Kerala State Awards for best cinematographer – for films Desadanam, Karunam, Adayalanagal, Bioscope and The way home. MJ started his career in cinema as an associate cameraman to Shaji N Karun. He has worked for over 75 feature films and several documentaries and has worked with some of the prominent Indian filmmakers including Adoor Gopalakrishnan, Murali Nair, Shaji N karun, TV Chandran, and Dr Biju.